In addition, the 2nd John Strang A. O Memorial Award was received by Health and Safety Executive UK.  Both awards were announced last night at the ICHCA 20/20 Cargo Vision international conference. 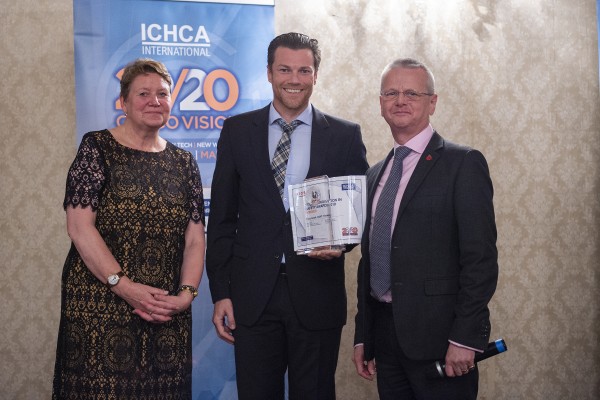 London 13 November 2019 – The 3rd TT Club Innovation in Safety Award was presented last night to a joint winning delegation of Künz, CSXIT and Yardeye at the ICHCA 20/20 Cargo Vision international conference, hosted by Malta Freeport Terminal, taking place at The Hilton Hotel, Malta between 11 and 14 November.  The 2nd John Strang A.O Memorial Award was awarded to Health and Safety Executive UK at the same evening reception and awards ceremony, attended by conference delegates from over 23 countries worldwide. The reception was held at Casino Maltese in Valletta.

Heike Deggim, Director of the Maritime Safety Division at the IMO and Peregrine Storrs-Fox, Risk Management Director at the TT Club presented the safety award to Stephan Trauth of Yardeye, who accepted on behalf of the winning delegation.

The TT Club Innovation in Safety Award aims to highlight the importance of safety at a time of increased operational demands on cargo handling infrastructure and operations worldwide. It champions and celebrates the many companies and individuals around the world who are 100% dedicated to ‘making it safe’ every day. Equally, it acknowledges and fosters innovation to improve safety in cargo operations and logistics.

The judging panel was impressed to receive such a broad spectrum of innovative ideas, processes and system improvements together with technology advances that all demonstrated not just the safety needs in the cargo-handling industry but also vibrant ingenuity. From a total of 17 entries, the judges narrowed the submissions to five shortlisted concepts, each of which had substantial merit in improving safety, including the ability to be implemented in broader environments

Künz, CSXIT and Yardeye won the Award for their Winter Haven Terminal Automation and Safety System automation project. The project demonstrated how an automated intermodal terminal achieved significant safety improvements, including amongst others reduced exposure of personnel to safety risks together with much-improved ergonomic conditions for the terminal’s crane operators.

The judges were also pleased to award a ‘Highly Commended’ prize to LINX Cargo Care Group for its LINX CCG Virtual Reality (VR) safety training programme, designed to increase knowledge and understanding of potential hazards throughout its organisation.

The UK’s Association of British Ports (ABP) and Global Container Terminals (GCT) from Canada were placed joint third: ABP being recognised for its project to design and provide female-specific PPE and work wear that provides improved protection for its female staff and GCT for its Deltaport Intermodal Yard Reconfiguration Project and the semi-automation at Deltaport – GCT transitioned its rail operation from a conventional one to a semi-automated mode in order to deliver significant safety improvements.

Both ICHCA International and TT Club have a fundamental commitment to risk reduction throughout the supply chain and, in particular, to safety within cargo handling operations. Promoting such safety advice is paramount to the philosophy of the two organisations and the Award reflects this commitment.

Said Peregrine Storrs-Fox on presenting the Award ‘’A key part of TT Club’s mission to the industry lies in minimising risk through safety research, advice, education and active lobbying to improve standards and regulations.  This requires broad collaboration – as with our current Cargo Integrity campaign, which seeks to engage all stakeholders in the global supply chain, urging them to take responsibility for the correct declaration, packaging and handling of goods in their care. This award seeks out and profiles initiatives that squeeze out the consequences of errors and substandard practices that can be life threatening.” 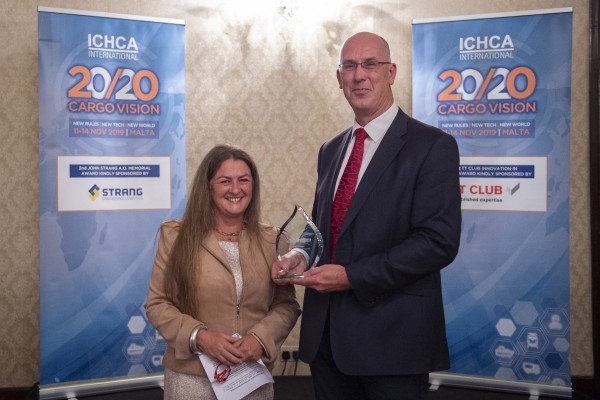 The 2nd John Strang A.O Memorial Award was won by Health and Safety Executive UK, accepted by Charles Oakley on behalf of the organisation and presented by Sallie Strang, in recognition of her late father’s commitment to promoting high standards of health and safety during his tenure at ICHCA and throughout his career.  The Award acknowledges the many achievements of HSE UK in reducing the number of industrial incidents and accidents that have caused either permanent ill-health or loss of life, as well as its extensive work in the port sector to establish regulations and codes of practice to promote safety.