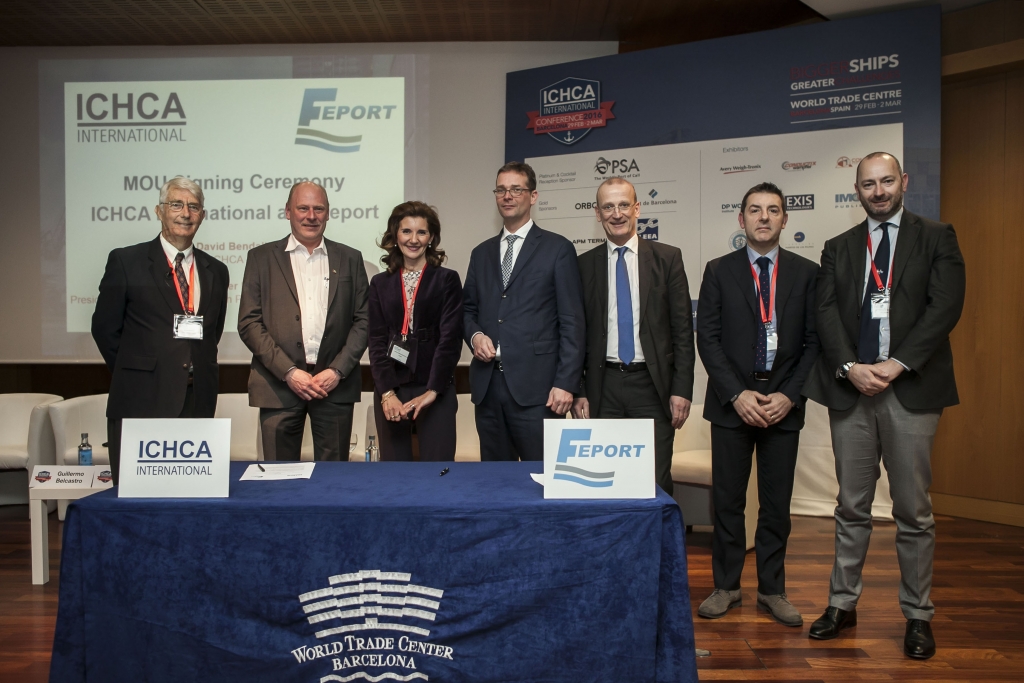 01.03.2016 – ICHCA International, the global cargo handling NGO association, has agreed to work with the Federation of European Private Port Operators (FEPORT) on matters of mutual interest. The two associations signed a formal Memorandum of Understanding on Mar 1 2016 at the ICHCA International 2016 Conference on “Bigger Ships, Greater Challenges”.

FEPORT President Günther Bonz spoke at the ICHCA Conference, where he expressed the views of the European private port and terminal operator community on the challenges posed by bigger ships and other key operational issues for the sector. He was joined by a delegation of senior FEPORT executives and members.

ICHCA International represents the interests of its 160 voting members, over 6,500 associate members and the industry at large in front of key UN regulatory bodies, including the International Maritime Organization. The Association provides a focal point for cross-party dialogue and knowledge sharing among different members of the cargo handling chain and promotes good practice in safe and efficient operations across sea, land and air, including containerised, bulk and other cargo types.

Founded in 1993 and located in Brussels, FEPORT is a policy-led and policy-driven organisation that speaks on behalf of terminal operators and stevedoring companies carrying out activities in the seaports of the European Union and Turkey. Its members include over 1,200 companies with over 400 ports located throughout the EU and Turkey. The Federation promotes the interests of its members by maintaining regular dialogue with all EU institutional and non-institutional stakeholders.

The ICHCA International 2016 Conference is currently mid-way through the first of two days of sessions. Bringing together a cross-section of industry and institutional stakeholders, the conference has so far included keynotes from the Secretary General of the IMO and Deputy Head of Cabinet for the EU Transport Commission.

Information for the media:

For more information on this release, and to discuss media partnerships and press passes, please contact Holly Thompson, Communications Officer at ICHCA International.

Established in 1952, ICHCA International is an independent, not-for-profit organisation dedicated to improving the safety and productivity of cargo handling and movement worldwide. ICHCA’s privileged NGO status enables it to represent its members, and the cargo handling industry at large, in front of national and international agencies and regulatory bodies, while its ISP Technical Panel provides best practice advice and develops publications on a wide range of practical cargo handling issues.

Operating through a series of national and regional chapters – including ICHCA Australia, ICHCA Japan and ICHCA Canarias/Africa (CARC) – plus Correspondence and Working Groups, ICHCA provides a focal point for informing, educating, lobbying and networking to improve knowledge and best practice across the international cargo handling chain.

FEPORT represents the interests of stevedoring companies and terminal operators at a European level. FEPORT’s members directly employ 220,000 port workers and its company members are among the top 15 global terminal operators in the world, representing a total share of 50 percent of the world’s gross throughput.

FEPORT groups its interests into nine broad categories: port policy, transport policy, maritime policy, security, safety and the environment, logistics, customs and internal market procedures, social policy (social dialogue) and R&D. The Federation’s objectives are: to inform and advise its members on European port-related matters, to discuss and formulate common points of view on European policy issues, to serve as an interlocutor for EU institutions and other national or international organisations and to share technical and operational know-how.