Day 4 of our battery fire safety week and today it is a case study published by the US National Transportation Safety Board.  The report itself provides a considerable amount of detail on the fire aboard the roll-on/roll-off cargo vessel Höegh Xiamen. 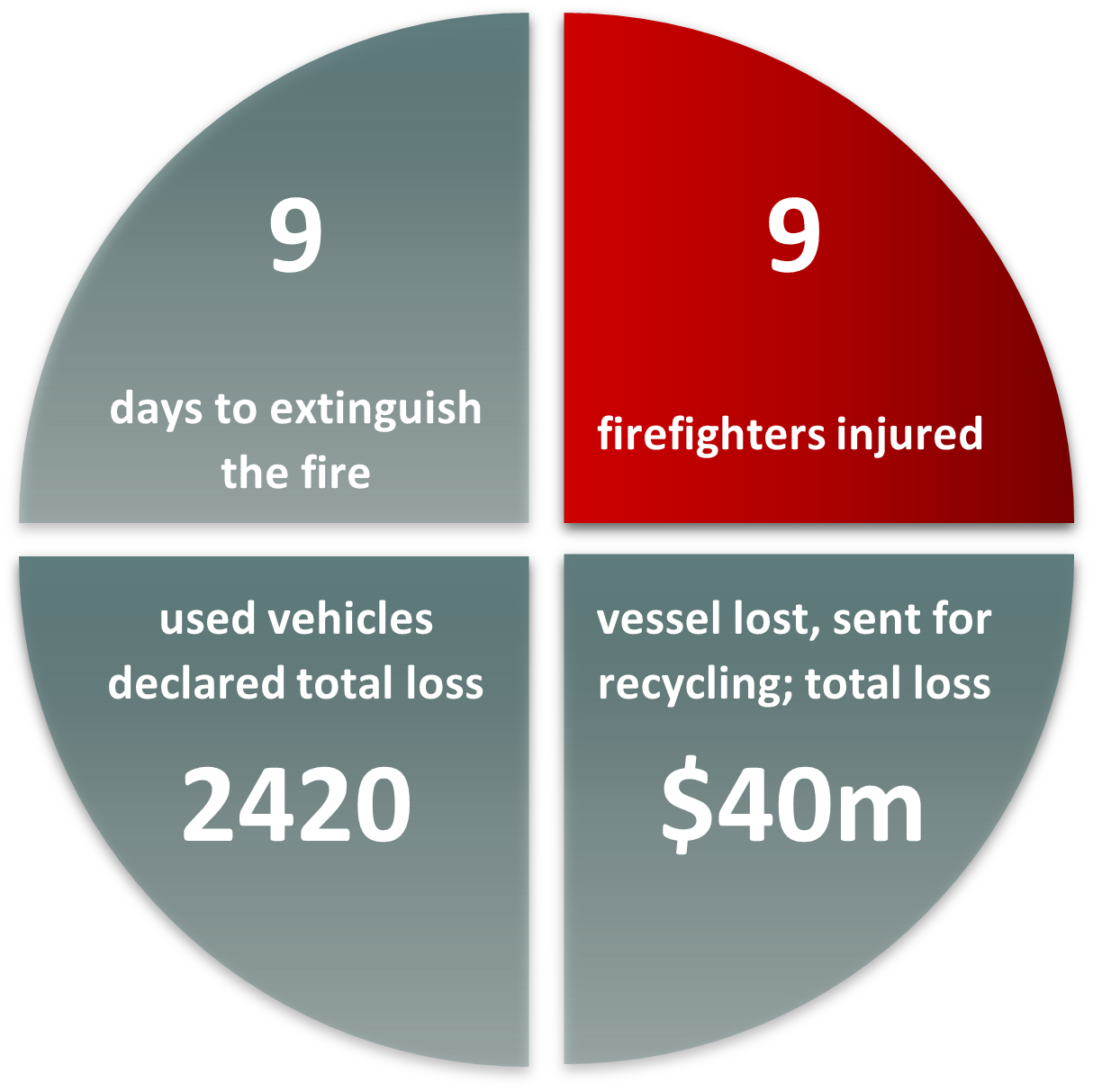 Nine shoreside firefighters heroically responding to the accident were injured during firefighting action on the first day.  Fortunately, none of the  vessel’s 21 crewmembers were injured.  The vessel and its cargo of 2,420 used vehicles were declared a total loss valued at $40 million, and the vessel was later towed to Turkey for recycling.

NTSB noted that the transportation of used vehicles, such as those loaded on Höegh Xiamen, is excepted from Hazardous Materials Regulations because the vessel had a stowage area specifically designed and approved for carrying vehicles.  Investigators found that used vehicles are often damaged and present an elevated risk of fire.   NTSB concluded that greater inspection, oversight, and enforcement are needed to reduce this risk.

NTSB determined that the probable cause of the fire was an electrical fault from an improperly disconnected battery in a used vehicle on a cargo deck.  This happened because “vehicle battery securement procedures were not being followed”.

​NTSB made recommendations to:

The full report is available from: https://www.ntsb.gov/investigations/Pages/DCA20FM020.aspx

We are keen to hear from you about your experience and perspectives on this topic.  Do you have comments on the material that we have shared?  Do you have links to guidance that might help others in the industry to continually improve management of this risk.

Please send any comments, ideas, links or questions to secretariat@ichca.com

The video recordings of our Li-Ion webinar are still available on our web site on the following links:

We are grateful to all of the organisations mentioned in this release who have demonstrated health and safety thought leadership by researching and releasing material intended for the benefit of the industry and its people.  References to external links, documents and web sites remain with the copywrite owners.

ICHCA International is not responsible for, and cannot guarantee the accuracy of, information on sites that it does not manage; nor should the inclusion of a hyperlink be taken to mean endorsement by ICHCA International of the site to which it points.